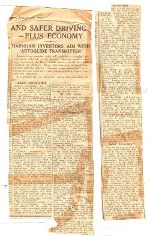 My Great Grandfather, Louis Langston, ( formerly Louis Solomon, the name was changed to hide from the Germans in WWII) was one of the inventors of the "Autoglide Transmitter" better know as the Automatic Transmission. No one in the family had recalled this nor had documentation of this until my grandfather, Peter Andriopoulos had passed on. While sorting his belongings my mother, Melody, came across a large storage tub which proved to be a treasure trove of family history on my mothers side. In it were the original love letters and Western Union telegraphs from my grandfather Peter to my grandmother Reina while he was stationed in Normandy France, she in London. He was a Greek immigrant to the US at the age of nine. He had fought for the US army at the battle of Normandy and my grandmother was a Royal British Army fire fighter. After the war they had married,remained in England for several years raising my mother before returning to the US. Other items included an NCO rule book describing the rules of social engagement in the club between men and women right down to hem length of skirts and distance between dancing partners! Among the treasure of personal items were this article from the London Journal January ,23rd, 1953 titled And Safer Driving --Plus Economy describing the invention of the Autoglide Transmitter. Along with this was a B&W photo of my Great Grandfather with his arm over his fabulous invention.We always knew he was an inventor as my mother recalls Harmony House (on the historic register today in Salisbury England) was a precarious place of wires, antennas and contraptions. Louis was and avid short wave radio operator now called HAM radio. He also invented the aerator in your faucets. (stolen by a US patent officer in 1905) so....unfortunately, inventors of great things rarely benefit from it. As the story goes it seems that GM copied the design and filed for a US patent as the English patent did not protect it here in the US. In 1954 or so GM introduced the first "Hydromatic Transmission" it too was three speeds and history was made. As you can see this is proof positive that what I do, create and design for your Scions is in my genes....and I love every minute of it. Thanks to my Great Grandpa Louis. Click the image to the right to view a full size image of the article.

x
Use Promo Code AIRLIFT20
To Take 20% off your entire purchase!